It's obvious why the Flames lost


Gaia is punishing this sinful city for not reducing our energy usage during Earth Hour!

In the presence of the High Priest


I decided to attend a speech by noted global warming pundit David Suzuki, which was held at Mount Royal College last night. The crowd was about what you'd expect: mostly college-age left-wingers who jeered at any reference to nuclear power, genetic engineering, or (worst of all!) bottled water. Oh well, if you're not a liberal when you're twenty...

Anyway, Suzuki's speech was considerably broader in scope than just global warming, and certainly wouldn't have done much to dispel critics who say that he's turning environmentalism into a new religion. He made numerous references to "Mother Earth" and "we are the Earth" and "the air is sacred," and much of the first third of his speech seemed to be devoted to claiming that "earth, fire, air, and water" was a better way of understanding nature than our silly periodic table.

In an interesting take on what constitutes an educated society, he argued that there is too much knowledge and information out there, because that allows people to cherry-pick the data to fit their preconceived notions. He gave a few examples, such as (paraphrased) "If you want to believe that global warming isn't happening, there are plenty of websites out there to support you." (I wonder how the crowd would have reacted if he'd said "If you want to believe that 9/11 was an inside job...")

The last part of his speech was a lengthy screed against economics. He attacked the idea that we can't afford to help the environment if it means hurting the economy, because the environment is ultimately more important. Well, that may be true, Dr. Suzuki, but the fact of the matter is that when given a choice between saving the whales and keeping their job, or between reducing carbon emissions and not freezing to death, people will pick the latter option almost every time. The only long-term way to improve the environment is to raise people's economic standing to the point where they have the luxury of caring about the environment and working towards its preservation. Maybe things should be the other way around, but they aren't, and wishing won't make it so.

The other part of his criticism was that economists view any exchange of money as a boon to the economy, and so they consider destruction to be a good thing if it means people will have to pay to rebuild. He gave an example of a Quebec cabinet minister, whom Suzuki says predicted that the 1998 ice storm would add $1.5 billion to the economy from repairing all the damage.

What Suzuki is describing is called the broken window fallacy. And he's right: it's a completely wrongheaded way of thinking. Where he's wrong is in claiming that this view is in any way representative of economists. Yes, there are a few out there who still believe this (they're called Keynesians), but pretty much everyone else acknowledges the obvious: a disaster like the ice storm is bad for the economy because it destroys wealth, and creates an opportunity cost when we have to replace it. If there hadn't been an ice storm, there would have been $1.5 billion more to produce new products (instead of rebuilding damaged homes), or build new infrastructure (instead of replacing toppled power lines), or any number of other uses.

Suzuki concluded by saying that he didn't have time to describe his proposed solutions for our environmental problems. That's unfortunate; if he had spent less time talking about how argon atoms are spread around the planet, we might have had a chance to weigh his "cure" against our "disease" and determine if it was worth the trade-off. Someone who lays out their ideas for solving global problems can have a positive impact on the level of debate, whereas someone who skips this step is no more helpful than if they wandered down the street wearing a "THE END IS NIGH!" signboard.

Oh well, at least this time he didn't incite the audience have people who disagree with him thrown in jail... 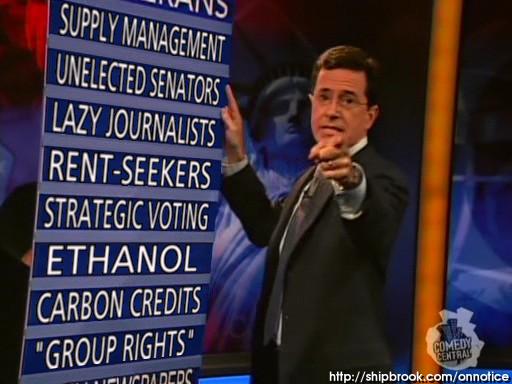 
The Liberal Party has released a new TV ad to counter the ones being run by the Conservatives. It touts Stephane Dion's work at the Montreal climate change conference in December 2005. The conference was attended by over 10,000 delegates from around the world, a feat which I'm sure didn't create any extra CO2 emissions. (But I digress...)

Anyway, the ad's narrator proclaims "They said he couldn't do it." (Who "they" are and the "it" he allegedly couldn't do is never specified.) We are then treated to a dramatic shot of "President" Dion banging his gavel, pumping his fists in the air, and declaring "Decided!"

So, what exactly was "decided" under Dion's leadership? Turning to the conference's press release, we find the following (emphasis mine):
And so on. The main thing that they "decided" appears to be that they'd continue to get together like this every year to "decide" even more things. Good work, Stephane.