Pics from the convention 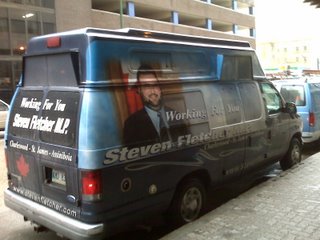 Steven Fletcher's van in front of my hotel 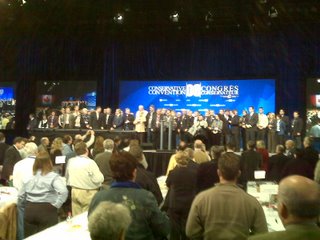 The Conservative caucus and other party officials at the closing ceremonies

Fun things you can hear at the airport


"Will Mr. Stockwell Day please return to the south end to pick up his luggage."


Heading off for the Conservative convention, whilst testing my new Blackberry's blogging abilities. 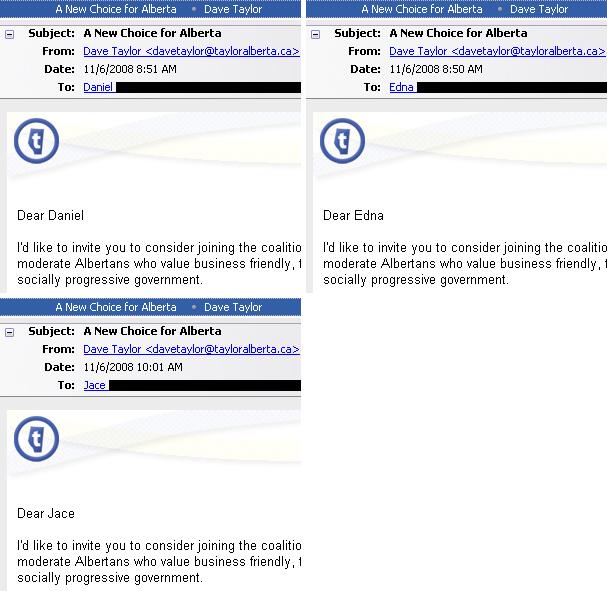 
From the Edmonton Sun:

Having sexual intercourse with a 13-year-old girl he believed was older was not a criminal act by a Calgary man, a judge ruled yesterday.

Provincial court Judge Bruce Millar said Matthew Allan Armstrong's testimony he accepted the girl's claim she was 16 was convincing, especially since he suffers a condition which makes him more gullible.

Millar noted Armstrong has myotonic muscular dystrophy, a disease which makes it difficult for those afflicted to make complicated decisions.

"People with myotonic dystrophy tend to believe what they are told is fact."

Okay, a couple of problems here. First of all, it seems rather odd to me that muscular dystrophy would cause mental problems like "gullibility". But I'm not a doctor, so I can't really say.

More importantly, why is what Armstrong "believed" even relevant here? If he sincerely thought she was 16, and is now in trouble because she was actually 13, that's still his fault for not checking enough. If someone gets pulled over for going 50 km/h in a 30 km/h zone, I doubt they would get off by saying "Sorry officer, but my speedometer is broken, and I really believed I was only going 25."

But the real kicker is the very last line in the article:

Armstrong still faces other allegations he tried to lure young girls over the Internet and remains in custody on those charges.

I'm sure those other girls all claimed they were old enough too, right?

I think the judge must be the one with the gullibility disease...

It's finally (almost) over


So I hear rumours that the Americans are having some sort of voting thingy today. By almost all accounts, Barack Obama is headed for a comfortable win over John McCain.

On the day of the first caucuses in Iowa, I ranked my preferences among the major candidates from both parties. McCain came in second, just behind Fred Thompson, while Obama was third.

Since then, the gap has widened substantially. John McCain has consistently taken the right positions on issues like Iraq, government spending, and free trade. Here is a good endorsement by David Frum (h/t Paul Wells), who has been very critical of McCain in the past.

Barack Obama is a very interesting politician, to say the least. In legislative office, he has been a risk-adverse state and federal Senator, seeming to prefer to take the path of least resistance. ("Present.") On the campaign trail, he combines soaring and inspiring rhetoric with clever and downright ruthless behind-the-scenes tactics. (Disqualifying nomination signatures, anyone?) Sometimes he goes way over the acceptable line; I was deeply disappointed when he dabbled in race-baiting this summer.

His association will William Ayers is another example of this. Most likely, he knew all about the guy's shady past, but simply calculated that "this guy has a political network that I need to get elected, and I can probably get away with using it."

On the positive side, I suspect Obama is more centrist that his voting record would indicate. In the lead-up to the Democratic primaries, he very cynically pandered to the extreme left of his party, especially when it came to free trade. Then as soon as he clinched the nomination, we saw that he was playing the nutroots for the fools they are, with dramatic reversals on NAFTA ("Sometimes during campaigns the rhetoric gets overheated and amplified"), an immediate withdrawal from Iraq, and that wiretapping immunity bill.

His ties to the Chicago School -- and moonbat denunciations of the same -- are also encouraging.

For this reason, I believe that a President Obama will likely be a prudent and effective leader... if he's paired with a Republican Congress. Which he won't be. There's a near-certainty of big Democratic gains in both House and Senate, who will most likely try to push him to the left. And given his track record as a legislator of meekly following wherever his party leads, I'm not very hopeful that he'll be able to buck that trend from the executive chair. I guess we'll have to wait and see.

Here's hoping that the Republicans get their act together soon, so that 2010 can be a repeat of 1994. The divided government following that election proved to be rather effective at things like balancing the budget and allowing business to grow the economy, after all. (And in the meantime, let's all pray the Democrats don't get a filibuster-proof 60+ Senate seats.)

Oh, and my prediction for this election? Well, most people seem to be projecting an Obama landslide of 350+ electoral votes, but I think it will be somewhat closer. My reasons for this are twofold:

1) The state-level polls seem to be swinging towards McCain over the past few days.
2) If I put Obama high like everybody else, and I'm right, then my bragging rights are diluted by everyone else. But if I put him low and I'm right, my genius will stand out more. :)

And so I look towards an Obama presidency with concern, but not fear or outrage.

Oh, one final thought for any Obama supporters who might be reading this: If you're expecting a fairly steady and thoughtful leader who will nudge the United States -- or let it drift -- towards your preferred policies, you'll probably be satisfied.

But if you seriously believe that he will change the way Washington works, or be a "transformational" figure (whatever that means), or vanquish anti-Americanism... you will be sorely disappointed.